I’ve always had a secret love affair with Pittsburgh, mostly because I was dying to go to college there at Carnegie Mellon University (CMU). I was coming from the middle of nowhere and was completely taken with the urban campus and how it seemed like a huge melting pot. I did not end up going to school at CMU, but I still have a fondness for PGH. 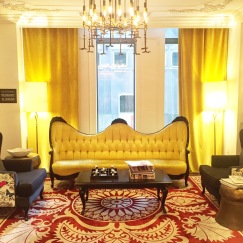 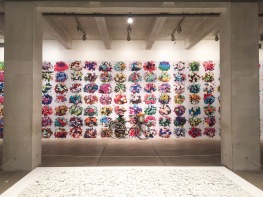 I went out to Pittsburgh for the first time in years since I relocated back to the Northeast from Texas. Everything was so far apart in the south. It took forever to travel from one place to another, so I was dying to explore places within driving distance to Philadelphia.

I did not pick the most ideal time to go. August. On  seriously one of the hottest and most humid weekends we had. Oof. It wasn’t the best idea, but I was running out of summer weekends before the semester was due to begin. The weather definitely limited what I was able to do, but I think I made the most of it!

I stayed in one of my favorite hotel chains ever…Kimpton! The Kimpton Monaco Pittsburgh is pretty much the epitome of adorable. It is full of interior design details including a chandelier made of flowers and great pieces of art. Of course, one of the best parts of staying at the Kimpton is it’s happy hour. This Kimpton’s happy hour highlighted real food, plenty of choices of alcohol including prosecco (one of my personal favs) and was full of people enjoying themselves. Normally when I have gone in the past it’s a few people that don’t talk to each other. This time I ended up playing Connect Four with a group of strangers and had a blast. The great ambience, fun group of guests and attentive staff has put this Kimpton at the top of my list.

I wasn’t in Pittsburgh very long, so I didn’t get to eat at as many places as I’d hoped.  Some of the highlights included the most adorable Biergarten at the Kimpton Monaco, which was located on the rooftop. In true Kimpton style they put extra effort into the details. Up on the roof you’ll find twinkle lights, games and picnic tables. It’s the perfect spot for a group get together. Another highlight was brunch at The Vandal; it’s one of those spots where you can’t help but fall in love. The decor is crisp and clean with white on white stylings accented with marble. The coffee is amazing and the dishes are inventive. I enjoyed a dish of biscuits and gravy with chicken confit, cornmeal topped with marigold greens. By far my best meal was at The Butcher and the Rye. It was too good not to do it’s own review, which you can find here.

The main purpose of this trip was see as much art as possible, especially since that’s an inside activity because it was so hot! I ended up going to The Warhol, the Carnegie Museum of Art and The Mattress Factory. I did separate posts for all of these visits that can be found under the Art section of the site.

For some reason I can’t shake Pittsburgh out of my head right now. I think it’s because I wasn’t able to do as much exploring as I had hoped. I can say for certain that this is a first trip of many to Pittsburgh. Now if only I could invent a time machine for that 5 hour drive!

I enjoy exploring new places and taking in amazing art and food along the way. Whether it’s a contemporary art exhibit or a hip new restaurant I’m always up for an adventure and I want to take you along. Follow along to get tips, tricks and suggestions for your upcoming travels.

A Weekend on the Eastern Shore